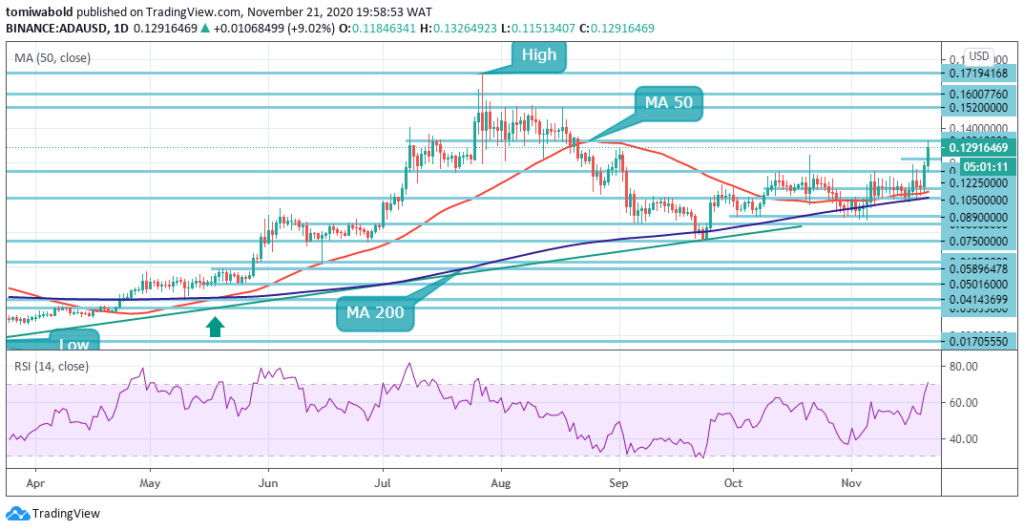 The cryptocurrency market has been on fire lately with BTC breaking past $18,000 and all major Altcoins gaining ground. ADA bottomed at $0.0753 on September 23 as the price failed to clear the barrier at $0.1150. In a bullish move that kickstarted when ADA price bounced from the key support at $0.1025, breakout on ADA/USD marks a 3-month high at $ 0.1326. ADA has been trading in the green for the last two days, gaining 18.23% daily and 25.87% on a seven-day basis. At the time of writing, ADA/USD is trading at $0.1292, after setting intraday highs of 0.1326, a level last traded since August 21. The market cap is ranked 10th on the Coinmarketcap table and currently stands at $4.04 billion, with $1.25 billion in trade volume over the past 24 hours. IntoTheBlock’s “Daily Active Addresses” model reveals Cardano’s new addresses have spiked with more than 7,000 new addresses joining the network daily.

After a short consolidation, ADA resumed its recovery on Nov. 20, regaining losses during the prior sell-off. A strong move above the MA 50 close at $0.1055 created a bullish drive which pushes the price to highs of $0.1317. Sellers’ pressure is seen at $0.1326, however, support is envisaged at $0.1225 slightly below where it trades.

Note: Kryptomoney.com is not a financial advisor. Do your research before investing your funds in any financial asset or presented product or event. We are not responsible for your investing results