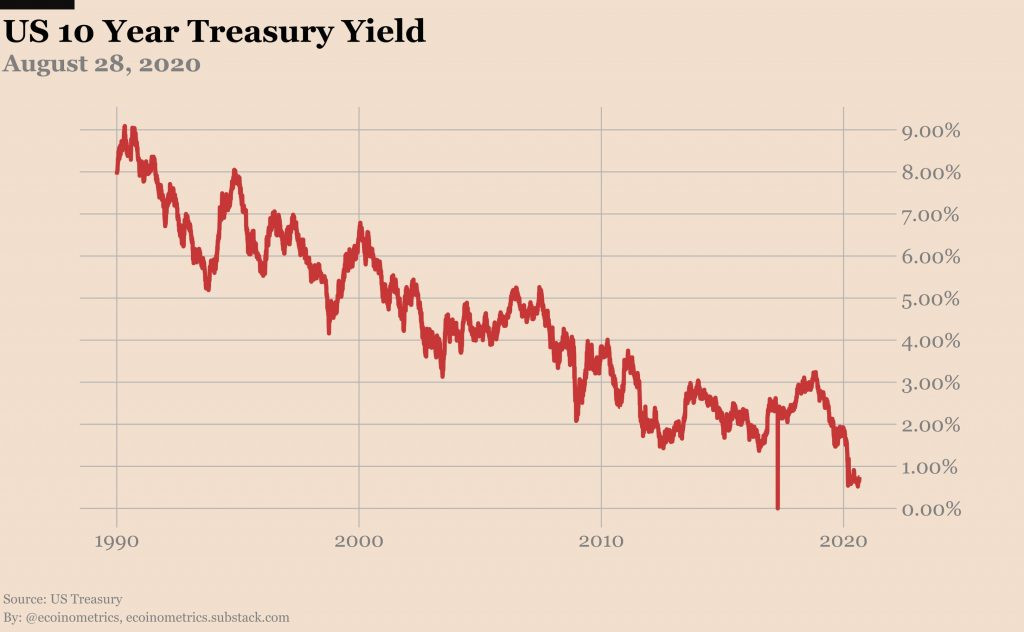 With the markets going the way they are, an asset that is resolute and can withstand seismic changes would bear importance. However, in such a market, does such an asset exist?

For the better part of the previous century, and even early on in the current one, long-term United States treasury bonds were thought to be those assets. Referred to as the safest investment in the world, these assets were backed by the entire weight of the U.S government and the Federal Reserve.

Top investors like Benjamin Graham and Warren Buffett hold the treasury rates in high regard and measure their stock’s dividend yield against the yields of these bonds. So, in a market as seismic as this, how are the treasury bonds faring?

In the present scenario, with every asset falling, 30-year US Treasury bonds are yielding less than 2 percent. What does this mean, not just for the asset itself, but for other assets which are comparatively faring better, like Bitcoin?

Looking at the yield for the shorter 10-year treasury bonds, it has been dropping consistently for the past few decades. This drop is exacerbated by each financial crisis, the 2008 housing crisis and the 2020 COVID-19 crisis being the pick of the lot.

In fact, a recent report by Ecoinmetrics looked at the above yields and suggested that the “trend is pretty clear,” even more so following a crash. The report read,

“After each financial crisis, yield is getting harder and harder to find. But for the Fed that’s not enough. As we are closing in on zero they might start to consider yield curve control.”

Another factor worth mentioning is the excessive printing of money which has added to the dropping rates. Such a situation is undoubtedly “good for Bitcoin, but likely to be very bad for inflation in the long run,” concluded the report.

Speaking to AMBCrypto, Nick the author of the aforementioned Ecoinmetrics report, stated that this points to the anti-fragile nature of Bitcoin, alluding to the book by Nassim Taleb. Nick summarized the nature of Bitcoin’s anti-fragility in the context of the crash as,

“Basically, a system is anti-fragile if it responds positively to shocks, disorder, crises or a volatile environment. I think Bitcoin is anti-fragile at its core. Time will tell if we are right.”

A classic example of something anti-fragile is the Greek mythological creature, Hydra – A creature that would sprout two heads if one was cut off.

With the cryptocurrency’s algorithmic monetary policy, it is allowed to not only remain, but also strengthen its value during a financial crisis, or following one. Since every crisis is succeeded by central banks increasing spending to bring back the economy, treasury bills, undoubtedly drop their yields.

So, should we be reconsidering which assets are resolute and which aren’t? If so, how well would Bitcoin and US Treasury bills do?

The post Bitcoin is the present-day Hydra… anti-fragile as ever! appeared first on AMBCrypto.

Cell Protocol: Gaining a Foothold in the DeFi Market