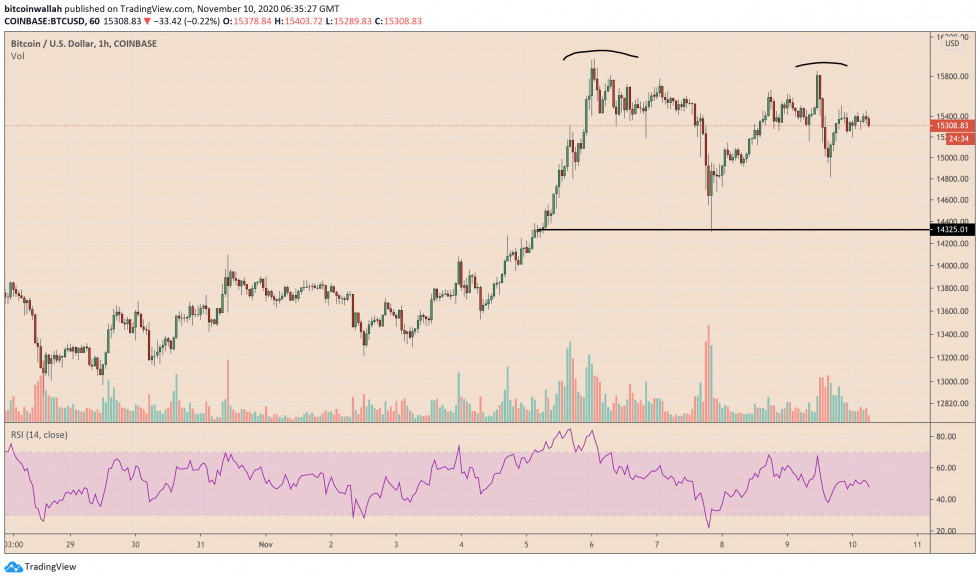 A bearish coup of the Bitcoin market this Monday met with a strong bullish defense influenced by a billionaire investor.

The flagship cryptocurrency rebounded modestly following a sell-off attempt that crashed the price from as high as $15,856 to as low as $14,817. Entering the Asian hours of the Tuesday trading session, BTC/USD recouped a portion of its losses by establishing an intraday high near $15,459.

The pair immediately retraced from its short-term downtrend after Stanley Druckenmiller, CEO of the Duquesne Family Office, praised Bitcoin during his interview with CNBC’s “The Exchange.” He referred to the cryptocurrency as a store-of-value asset with a lot of appeal among the Millennials.

“It’s been around for 13 years [correction: 12], and with each passing day, it picks up more of its stabilization,” Mr. Druckenmiller added.

His statement came when Bitcoin was trading lower. The cryptocurrency plunged on Monday after Pfizer’s COVID-19 vaccine trial success revived hopes of a concrete global economic recovery. That allowed investors to rethink the need for more stimulus packages, therefore spelling trouble for the anti-inflation assets.

But Mr. Druckenmiller showed a long-term bullish bias for safe-havens like gold and Bitcoin. The billionaire investor admitted to CNBC that he now owns some cryptocurrency units, adding that he believes his bet on the young asset “will work better” than his bet on its traditional rival gold.

“Bitcoin is more illiquid and has a lot more beta to it,” stated Mr. Druckenmiller.

Ignoring the COVID-19 vaccine’s prospect, Mr. Druckenmiller noted that the global central banks have already made a breeding ground for Bitcoin’s next price rally via its massive stimulus measures. He added that due to the US Federal Reserve’s expansionary policies, the inflation might rise in the next 5 to 6 years.

It will keep investors glued to hedging assets like Bitcoin and Gold.

Jerome Powell, the Federal Reserve’s chairman, said on Thursday last week that his office would keep its interest rates near-zero while buying the government debt indefinitely.

So far, his policy to tackle the pandemic’s economic turmoil has led the long-dated Treasuries into a negative-yielding territory (a record of $17.03 trillion, according to Bloomberg). Its ability to generate negative returns has displaced investors’ capital from the debt market to riskier ones.

This money migration has helped Bitcoin log 100 percent YTD gains in 2020. The move has also benefited stocks (even those with poor and unclear forward guidance) and gold.

“As long as Bitcoin stays above $14,000 and Ethereum above $400, these cryptocurrencies will likely continue trending upwards,” Konstantin Anissimov, Executive Director at CEX.IO, told Bitcoinist in an email statement.

“Failing to do so may trigger a corrective period where BTC could retrace to $12,000 and ETH to $320. Regardless, the overall outlook currently favors the bulls,” he added.

TA: Ethereum Holds Strong at $440, Why The Bulls Remain In Driver’s Seat