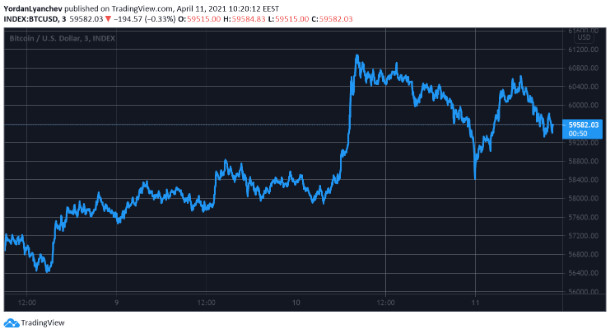 Bitcoin struggles below $60K as the coin dropped again while Stellar’s XLM surged 25% in the past 24-hours and entered the top 10 coins by market cap as we can see more in our latest Bitcoin news.

Despite overcoming the $60K level once, Bitcoin struggles below $60K again while most altcoins retraced slightly with the exception of XRP as it surged to $1.4 after positive news emerging from the ongoing SEC battle. After the three-week-long wait, BTC overcame the $60K again but the cryptocurrency kept going upwards and reached a new high of $61,200. However, not everything is good news because the coin started retracing fast.

The main cryptocurrency lost $2K of its value to a low of $58,300. According to the technical indicators, the $60K level remains the first major resistance in the way up and BTC was not able to close the daily candle about it yesterday. In case the cryptocurrency breaks above the milestone, the next resistance is set at $61,170 followed by the ATH of $61,780. The support levels at $59,070 and $57,695 will assist in a case of a new price breakdown.

The altcoin market had a great weekend as ETH hit a new ATH, inches away from $2K. However, the second-biggest cryptocurrency lost a little more than 2% and dropped a little lower than $2100. Binance Coin hit a new high of $485 but then retraced to $475. BNB is up by 40% in the past week. Some of the other coins that retraced were Polakdot by 5%, ADA by %, UNI by 4%, and LINK by 3%. At the same time LTC increased by 10% and XLM surged by 25% to a new high of $0.61 but what’s even more interesting is that XLM replaced LINK in the top 10 coins by market cap.

Ripple’s performance trumped the bigger cap-altcoins as the company won another legal fight against the SEC with the judge halting the Commission’s attempts at gaining personal information on both company executives. The XRP token rallied by 40% in the next few hours and marked a 3-year high at $1.4. More gains were evident from Elrond 15%, Reserve Rights 13%, and IOTA 10%. Despite the slight retracements, the crypto market remained above the $2 trillion levels.