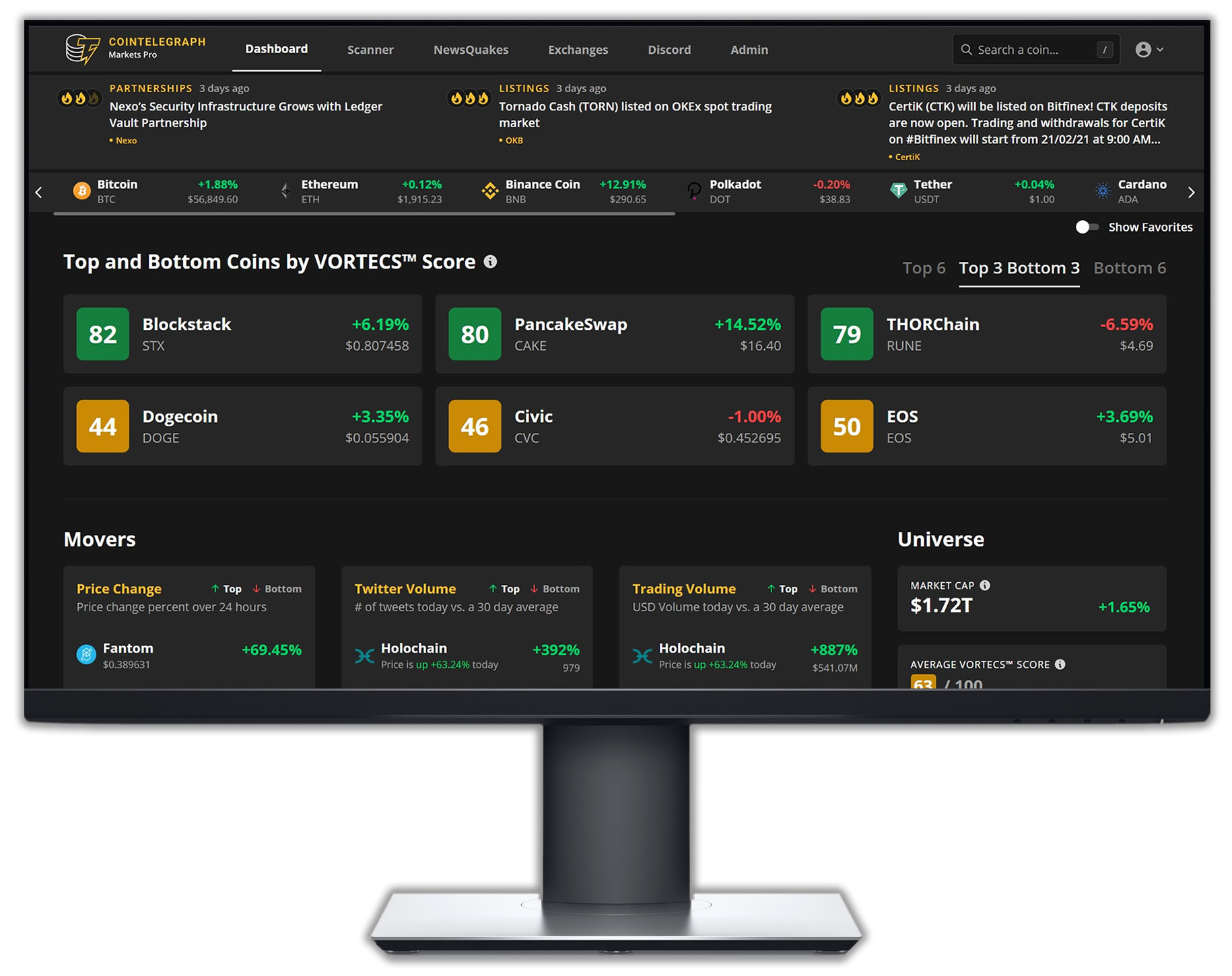 The platform, which has been in development for a year, is the result of exhaustive analysis of the crypto markets and the key drivers of asset price movements. It was developed jointly by Cointelegraph and The TIE, a leading provider of crypto data, analytics and software that counts major hedge funds, market makers and OTC desks among its clients.

At the heart of the platform is the VORTECS Score, which compares current market conditions for over 130 crypto assets to historically-similar marketscapes. A proprietary algorithm analyzes those historic conditions, seeking consistent patterns in market behavior in the following days.

“Even if crypto markets may seem volatile, the volatility often demonstrates remarkable consistency,” said Cointelegraph CEO Jay Cassano. “While we’re all aware that past performance is not indicative of future results, the Markets Pro platform combines sentiment analysis and social media activity with real-time market conditions in a way that allows us to create very specific models.”

“History doesn’t predict, but it can be deeply informative.”

“We tested every score that crossed a certain threshold in our live beta phase,” explained Frank. “When the VORTECS score for a particular crypto asset crossed 70, we saw an average price increase of 7.61% over the next 24 hours, and 25.9% over the next seven days.”

Frank noted that when scores that crossed the 80 threshold, asset gains were 8.58% over the next 24 hours — and 28.2% over the following week.

“Of course, since most crypto traders are rotating into other assets such as Bitcoin, the real measure of success during a bull market is whether or not assets that crossed these thresholds delivered gains against the entire crypto market,” continued Frank.

Cointelegraph Markets Pro also features NewsQuakes, a comprehensive headline news aggregator believed to be the fastest in the cryptocurrency industry.

“We’ve been working with The TIE for a year to identify and isolate the most important price drivers in the news cycle,” explained Cointelegraph Editor-in-Chief Jon Rice.

“Token burns, exchange listings, partnerships and staking announcements are among the headlines that tend to move markets. The Markets Pro platform uses AI to sift through the thousands of sources we analyze every minute, delivering key insights into these events directly to Markets Pro subscribers — often within seconds.”

Rice suggested that when a cryptocurrency asset is listed on Coinbase, for example, it often sees rapid and significant price appreciation. “These announcements can deliver swift returns to traders who pick up on them quickly,” he said.

“For instance, our NewsQuake system delivered the news of the Filecoin listing in December within a minute of the announcement — and almost 60 seconds before the Coinbase team tweeted. That window matters to traders.”

Rice also noted that for many foreign exchanges the time between an announcement in the exchange’s native language and an English version can be far greater, but that the NewsQuake service supports multiple languages and translates them in real-time.

Market intelligence for everyone

Markets Pro subscribers also gain access to community features. Managed by teams from both Cointelegraph and The TIE, members can join the discussion with fellow enthusiasts, share strategies and ideas, and access unique research from the experts.

Cassano hopes that the combination of real-time news and algorithmic modeling makes the crypto markets more accessible to investors of all stripes. “We’ve witnessed a global surge in interest in cryptocurrencies, as well as a realization that the information asymmetries inherent in existing financial markets tend to be stacked against the average investor. I hope that Markets Pro can help level that playing field in the crypto industry.”

Frank echoed the sentiment, expressing that “When we initially set out to build The TIE more than three years ago we had one singular goal, to enable millions of everyday investors around the globe to make more informed decisions with trusted and transparent cryptocurrency data. The challenge was synthesizing the billions of data points we captured, and sharing intelligence that is actionable and insightful for everyone.”

3 Bitcoin price metrics show bulls were not fazed by today’s $1.6B liquidation