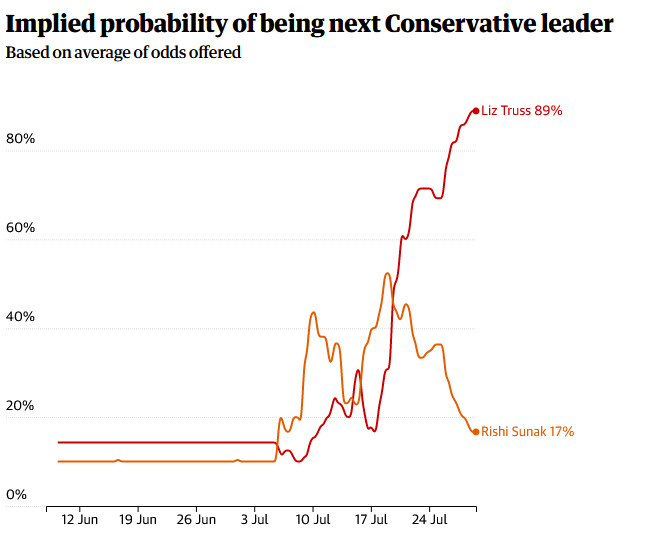 The shock resignation of Rishi Sunak on July 5 has cast uncertainty on the future direction of crypto in the U.K.

In the months before his resignation, the former Chancellor spearheaded several policies to turn the country into a global crypto hub. This included payment regulation reform to recognize stablecoins as a valid payment, creating a regulatory sandbox, developing a “Cryptoasset Engagement Group” to act as an interface between government and the crypto industry, and re-evaluating taxation policy towards digital assets.

But with Sunak gone, it’s unclear to what extent these plans will continue, if at all. More so, considering the possibility of anti-crypto factions seizing the opportunity to exert pressure during this period.

Sunak had already clashed with the Bank of England (BoE) on the matter. Central bank officials had argued for tighter controls on stablecoins following the Terra UST implosion. In its Financial Stability Report for July, the BoE said, although the UST de-peg and subsequent market turmoil posed no financial threat to the U.K, it raised the point that “systemic risks would emerge” if digital assets are allowed to further integrate with legacy systems.

“These events did not pose risks to financial stability overall. But, unless addressed, systemic risks would emerge if cryptoasset activity, and its interconnectedness with the wider financial system, continued to develop.”

As things stand, the U.K crypto community is in limbo with what happens next.

Twist in the tail

Boris Johnson’s role as Prime Minister became untenable, casting further uncertainty on the U.K’s ambitions as a global crypto hub. In a statement made on July 7, Johnson conceded that a new leader was “clearly the will of the parliamentary Conservative party.” And that he will leave his post once the party elects a new leader.

The pair now face a timetable of nationwide “hustings,” to rally support from the 160,000 party members eligible to vote, and several televised debates for each to air their political opinions and policy proposals. The new Conservative leader will be announced on September 5.

Data from Oddschecker, compiled by the Guardian, showed that Truss has opened up a wide lead over Sunak in recent weeks.

The Guardian commented that Truss has the backing of “many on the right of the party.” While, Sunak’s recent controversies, including his breaches of coronavirus restrictions and his wife’s tax avoidance through non-domicile status, weigh heavy on his bid for leadership.

Where do the candidates stand on crypto?

As mentioned, from the perspective of leading innovation, Sunak is keen on reinvigorating the U.K’s financial sector using crypto as the catalyst. It’s assumed he would adopt the same stance if elected Prime Minister, making him a strong choice for those with pro-crypto leanings.

Little is known about Truss’s current views on the matter. However, a 2018 tweet from the Foreign Secretary demonstrated an understanding of the importance of a fair and balanced policy toward digital assets.

We should welcome #cryptocurrencies in a way that doesn't constrain their potential. Liberate free enterprise areas by removing regulations that restrict prosperity. #PolicyExchange #futureoffreedom #shakeup

More recently, Truss pushed through the Economic Crime Bill, which was designed to broaden the scope of sanctions against Russia and curb the flow of illicit money from Russian oligarchs entering the U.K. The bill introduced powers to seize assets, including cryptocurrencies.

However, she has yet to make a statement on where she stands with cryptocurrencies and, if elected Prime Minister, whether she would follow through with Sunak’s crypto hub policies.

With energy bills set to soar by 68% in October, just as the colder months set in, and double-digit inflation on the horizon, the next Prime Minister will have their work cut out to deal with the economic storm that is brewing.

That being so, it is difficult to imagine unproven experimental technologies, such as cryptocurrencies, will feature high on the agenda. More so, considering the odds on favorite has yet to mention digital assets in her campaign, let alone given a public policy proposal on them.

For now, U.K crypto advocates can only sit and wait.

Remember Gamestop? This $300 Billion Memestock Leaves It Miles Behind