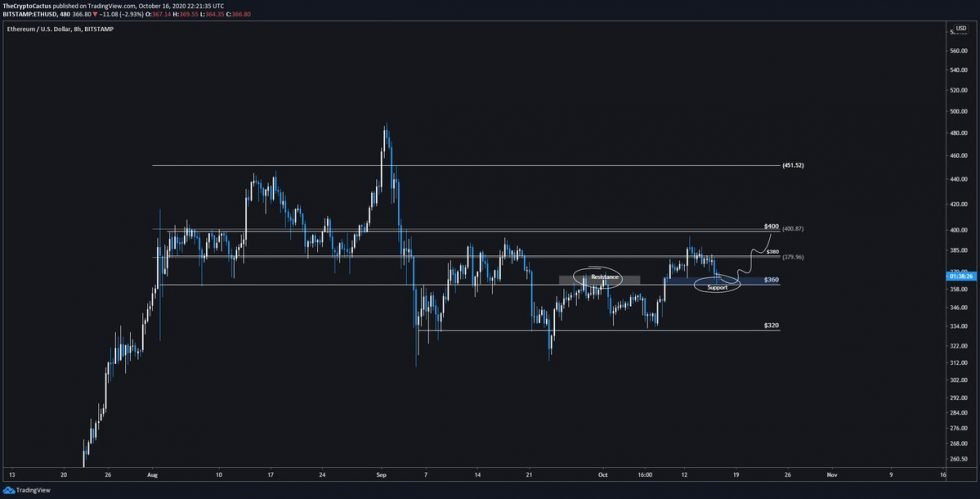 Ethereum and the entire crypto market have lost their momentum, with many altcoins drifting lower as Bitcoin remains stable around $11,400.

The entire crypto market’s near-term outlook hinges largely on that of Bitcoin. Until the benchmark cryptocurrency can gain some momentum, altcoins will likely continue seeing some underperformance.

One analyst is now noting that Ethereum’s recent decline has driven it down towards a crucial support level that must be defended.

He says that a failure for ETH to remain above this level would be quite grim and potentially have dire impacts on its near-term outlook.

At the time of writing, Ethereum is trading up just under 1% at its current price of $368. This marks a notable decline from its recent highs of $395 set just a few days ago at the peak of its recent upswing.

From here on out, its price has been drifting lower – being unable to garner any clear momentum in either direction.

Until it breaks its current consolidation phase and rallies higher, its near-term outlook may remain somewhat grim.

Analyst: ETH is About to Reach a “Do or Die” Level as Selloff Continues

While sharing his thoughts on where Ethereum might trend next, one analyst explained that the $360-365 region is a critical support for ETH.

He believes that downside could be imminent if this region is broken below.

“ETH / USD: Here we go, major region being retested, previous resistance now looking for it to be maintained as support. This region between $365-$360 is one of the most important ranges, without it holding as support we could very quickly head back to the local lows. No panic.”

If this level is defended, however, it could act as a launchpad that helps send Ethereum significantly higher.

Monero Scales Up To 10 Times With The Latest Upgrade: Report

Samsung moves to autoblock spam calls, but only on its top-end phones