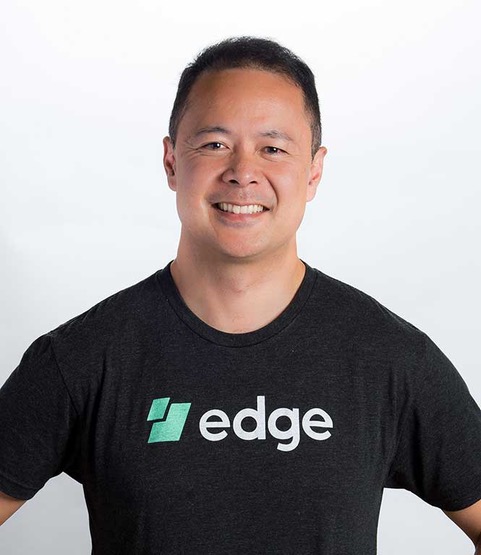 Paul Puey blended his experiences in Silicon Valley and small business with his training as an engineer to found Edge, a mobile wallet and single sign-on security platform for blockchain and cryptocurrency applications.

After graduating from UC Berkeley with a degree in engineering, Mr. Puey worked in Silicon Valley, mainly focusing on GPU chromatic research for NVIDIA. He then ran his own business and began learning about Bitcoin.

“That brought me back,” Mr. Puey recalled. “It resonated with my experience with small business payments and PCI compliance.”

Mr. Puey founded AirBitz (since rebranded as Edge) in 2014 with the initial goal of building a better mobile Bitcoin wallet but its focus quickly grew to include the management of different keys and how to make private keys essentially invisible to the end user. That decision was made as the entire cryptocurrency industry began to expand to include a variety of assets, tokens, dApps and blockchains, each with its own unique configuration and purpose.

Developing technology in such an environment is both invigorating and challenging, Mr. Puey admitted. Startups can quickly sprout because of some of the available tools. That helps them get on the map. But many of those tools are poorly documented or unstable so developers have to be nimble as they adjust to flaws exposed in the future, better alternatives which later emerge, and industry developments such as protocol changes or forks.

If you are a developer content on applying what you already know in predictable environments, look for a position in a larger company where you are more likely to have clearly outlined duties. But if you have a passion for the industry and want to help shape it, there may be a spot for you with Edge.

“We like to focus on people with aligned interests,” Mr. Puey said.

One criticism of private keys is they force consumers to have to learn new behaviors and concepts. Better to have people perform behaviors they are already familiar with.

You can have both, Mr. Puey said.

“If users lose control of their private keys en masse than we will lose 99 percent of the purpose of cryptocurrencies.”

Allow the users to control the private key but make their use so simple and similar to other behaviors that it seems familiar. That works for the user and the platform which is absolved of the custodial responsibility. Edge cannot access users private keys but provides them with password and multi-factor authentication include biometric capability.

Biometrics are important but are best used as one component of a multi-factor authentication process, Mr. Puey explained, using the analogy of being stranded on an island without your mobile device. If there were other devices on the area, you would not be able to access your accounts with your fingerprints or iris scan, you would need your password first before using biometrics to reauthorize yourself. If biometric authentication was the only accepted step someone could eventually figure out a way to access one biometrically protected social media account, for example. Once they did, all of that victim’s other biometric security measures would be useless.

A single sign-on security platform for multiple solutions is becoming increasingly important in the IoT era, Mr. Puey said. Yes, all of these devices are convenient, but embedded deep in most is a factory password which, if discovered, can give crooks access to your increasingly connected world. The user still needs to take their own steps to maintain optimal safety.

Watch to see how developers utilize EOSIO with its new governance model. While Bitcoin purists won’t like it, developers should enjoy its speed and lower costs.

“Price matters,” Mr. Puey said. “It gives the industry resources. We should be the fuel not the car.”

Mr. Puey does not believe the ICO is necessarily dead but does feel a better filter is now in place for viable security token issuers who now have to do more than publicize an idea and wait for the cash to roll in. STOs, while not as disruptive technologically speaking, will remove KYC and AML-related frictions for accredited investors and bring back an aspect of investing that is less common than it used to be.

“One thing that is compelling about STOs is the potential to bring liquidity back, so the bare assets can be traded between anyone anywhere,” Mr. Puey said.

Related Topics:blockchainprivate keys
Up Next

BitBounce helps you control your inbox while earning crypto

LTC Price Analysis: LTC/USD Gears Up for a Bullish Strike at $100, Pizzahut to Accept Litecoin for Payments