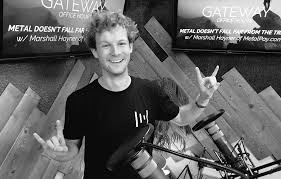 Metal CEO Marshall Hayner was an early Bitcoin proponent, having mined his first one back in 2009. Even then, it was the technology behind decentralized networks that excited him. And it still does today.

In college he started moderating forums on Bit Torrent and The Pirate Bay, including becoming involved in a discussion with what he initially believed was someone claiming to be Nine Inch Nails singer Trent Reznor, who was on a thread discussing novel ways to release an upcoming disc. The discussion continued, with Mr. Hayner still not believing he was communicating with the real Trent Reznor.

Turns out he was, and as the discussion continued Mr. Reznor was all in but concerned about how people would directly pay for the download. The thread exploded in popularity with everyone sharing their two cents’ worth on how to best send payments.

“I remember thinking this is crazy, none of this stuff is going to work,” Mr. Hayner recalled.

He helped figure out a solution and the rest is history.

“The recording industry didn’t like it,” Mr. Hayner said. “Now it’s all streaming but back then there wasn’t any. Communities then were worried about the quality of the files that were streaming but now there’s no quality issues.”

Cryptocurrencies were also in their infancy back then, and Mr. Hayner remembers thinking that if Bitcoin was the cash equivalent of a decentralized network that it could revolutionize money as we know it. So he started following and contributing to discussion threads, where he recognized some familiar contributors from past forums.

“I read more and got excited,” Mr. Hayner recalled. “2,600 cypherpunks getting excited about encryption-based things.”

As passionate as he was about Bitcoin back then, it sure wasn’t easy to find any to spend, Mr. Hayner said. Many would barter online in exchange for VISA gift cards.

“That was such a funny time and really exciting,” Mr. Hayner recalled.

The struggles had only started, as early wallets didn’t come in mobile versions and took an hour to open. Twenty percent of the time they crashed, sometimes fatally, causing the holders to lose their bitcoin.

“If I could build better software this could get really exciting,” Mr. Hayner thought at the time.

In 2014 Mr. Hayner was living in California and founded QuickCoin, a one-click Bitcoin wallet for Facebook. Anyone signing up got $5 in bitcoin from his personal stash.

“It was a great time, exciting,” Mr. Hayner recalled. “I remember thinking people will use this if it’s easy. It has to be fun.”

Mr. Hayner then joined the Stellar Development Foundation, where he helped promote the launch of the Stellar Wallet before becoming Block.io’s chief marketing officer. He said he took valuable lessons from every stop, including the importance of gamification at Stellar, where people could earn stellar lumens for completing different tasks. At Block.io he cited security and the experience he had interacting with Dogecoin, which rekindled his passion for cryptocurrency.

That passion was crucial, as venture capitalists were starting to pay attention to cryptocurrency and blockchain and they were taking a bit of the fun out of it.

“For them it’s not as much fun,” Mr. Hayner said. “It’s more serious, they didn’t care about the technology, just the price.”

Armed with this education, Mr. Hayner founded Metal in 2016 with the vision of providing people more power over their finances.

“Let’s make money fun,” he thought at the time. “Let’s build a new bank, a new payment system on where instead of taking fees it is rewarding you.”

Make cryptocurrency easy to use too, he quickly added. Use simplicity and real world use cases will attract more of a mass market than a highly speculative asset with know clear benefit to many will.

Available at the App Store, Metal is a convenient payment method, Mr. Hayner said. Recipients instantly receive funds with no fees attached. The sender also receives Metal, the site cryptocurrency, and soon they will be able to earn many more.  Designed for everyday use, Metal can be cashed out to your bank, used as payment, or saved as a value store. Metal can also be bought and sold, along with 15 other cryptocurrencies, on the Metal Marketplace from your FDIC-insured cash balance.

When he looks ahead in 2019 Mr. Hayner is excited about the development of security token exchanges and tokenized equity, provided regulators do their part by reducing the amount of red tape that threatens growth. BAKKT and the Open Finance Network are playing key early roles in growing that sector.

These decentralized newcomers just may be creating a completely new Federal Reserve as they challenge incumbent systems, Mr. Hayner said.

“The big moment for banks is when they see what Metal is doing for the blockchain,” Mr. Hayner said. “We’re building the same ACH, SEPA, and putting them on the blockchain while adding an identity layer. Why are Bitcoin and other cryptocurrencies not accepted? They combat fraud and there’s no chargebacks.

“Our blockchain is the layer between fiat and cryptocurrencies.”