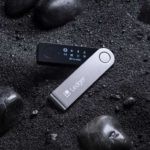 Ledger Gets Funding From Samsung to Become a $290 Million Company

The wallet maker which completed a $7 million Series A funding round in 2017, and a $75 million Series B last year recently promoted Pascal Gauthier to CEO.

The former CEO of the company, Éric Larchevêque, was one of the first set of people to confirm Samsung’s investment. The former CEO tweeted that:
~we’ll “always need hardware wallets,” but that in the crypto revolution “the smartphone ...

Another Magical Q2 for Bitcoin Ends in the Green, BTC Up Almost 50%