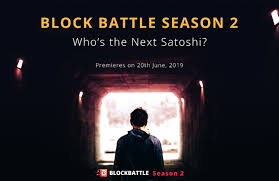 Producers of a television show dubbed “Shark Tank for blockchain” are searching for entrepreneurs with the next big idea. The best ideas could win as much as $10 million.

Block Battle Season 2 is accepting participants here. It is a TV program that takes you into the heart of the global emerging technology of blockchain technology. Participants will compete over five episodes, in order to find the winning team.

This year’s question is simple. ‘Why does your project need blockchain technology?’ In addition to answering this, Contestants should upload a project introduction video of around two minutes to the website. Projects received in April will be subject to basic technical verification and preliminary judges will conduct the first round of screening.

Ten teams will advance to the finals. They will participate in competitions including a five-minute presentation, one-on-one white paper battle, and a final competition. Judges include venture capitals, cryptocurrency exchanges executives, successful project CEOs, and crypto fund managers. Season One judges included:

The first episode, scheduled to air Thurs., June 20, will be broadcast simultaneously in China, Australia, Thailand, Malaysia, Taiwan, Singapore, Vietnam and Hong Kong. It will also be shown live on the online channel Youtube Coin Cast.