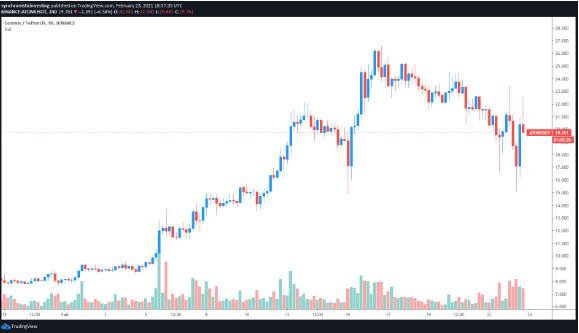 SOL and ATOM prepare to hit new highs as the tokens surged with the new interoperability upgrades got revealed so let’s read more in our latest altcoin news.

Bitcoin’s sharp correction below $45K made shockwaves over the entire market for the second day in a row and many altcoins were fighting to hold the gains that they got since the start of 2021. Two exceptions to the current downturn are Solana and Cosmos which managed to make small price breakouts following recent bullish developments for every project.

The data from Tradingview shows that SOL and Atom saw slight price dips in the early trading hours of trading but both were able to pick up the steam faster and outperform the market for the day. Solana’s price broke out when Raydium which is the first automated market marker for the blockchain got launched. The AMM platform enables faster trades, shared liquidity, and the new ways that the token holders earn yield.

The release of Raydium helps to bring the SOL ecosystem closer to the ETH as the main Defi competitor as the traders look for other ways to escape high transaction costs on the network. The evidence of the growing influence can be seen in a proposal from SushiSwap dubbed Bonsai which aims to integrate the SUSH ecosystem with Solana and to avoid high fees on the ETH network. The proposal is still in the early stages and has to be approved via a community vote as the traders responded to the news quite well which helped SOL’s price bounce back and hit a new aTH of $15.88.

If approved, Sushiswap users can manage their yield farms and will conduct the token swaps on the blockchain. The team said that Bonsai will be live on the testnet by the end of Q1 this year. Also, the recent bullish outlook for Cosmos is mainly because of the Stargate upgrade that includes the IBC protocol as a new interoperability layer for the Cosmos blockchain. The IBC will allow projects such as Band Protocol and KAVA to interoperate and bridge tokens across other blockchains on the network. The network is expected to work with other protocols as well, like the Binance Smart Chain.

The ATOM price dropped by 35% to $15.07 but the protocol upgrade news and the dip-buying pushed the price to $19.83. The IBC will allow other projects to be utilized in the Defi sector and will bring a new level of functionality too.