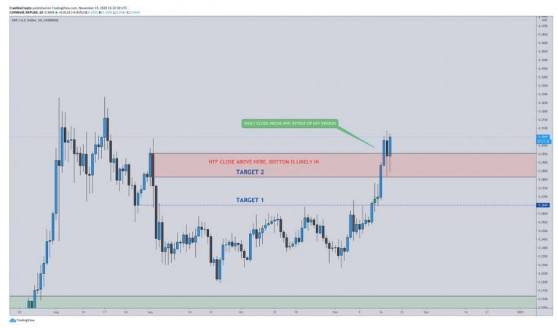 XRP marks highest rally since July this year as it increased by 30% and reached a price level of $0.4 in a timespan of 24hours so let’s read more in today’s Ripple price news.

XRP’s price increased by about 30% in the day and now marks a weekly increase of 48%. Coinciding with the rally over the past week is the developing COVID-19 pandemic and Joe Biden’s presidential election developments. XRP marks the highest level of the rally since July with a market cap of $16,68 billion while hitting a price of $0.4 as well.

XRP is a cryptocurrency that is mostly favored by payments institutions that are using it for real-time settlements and to also move money across banks with low costs. XRP was developed by Ripple which is a non-profit company in San Francisco but the ongoing regulatory hurdles are making it hard for the asset to operate in the United States.

The entire market showed some signs of strength recently, with Bitcoin looking as strong as it tries to move past the $18,000 with major altcoins flashing major signs of strength. Where will XRP trend next will depend on whether or now BTC and the rest of the altcoins will be able to maintain their upwards trajectories since more downturns will create shockwaves for the entire market. One analyst now noted that there’s a strong chance that another upside is imminent in the near-term as the cryptocurrency bounced from the previous resistance level, confirming it as support. Because this is a classic sign that an upwards continuation is imminent, XRP will be on the verge of getting into a massive near-term upside. Another trader is going so far as to call it a long-term bottom.

An XRP trader targets a price move towards $0.85, claiming that Ripple is on the “verge of something big” with the price action over the past few weeks being lackluster.

Bitcoin Reaches a Critical Junction; What Analysts are Watching For